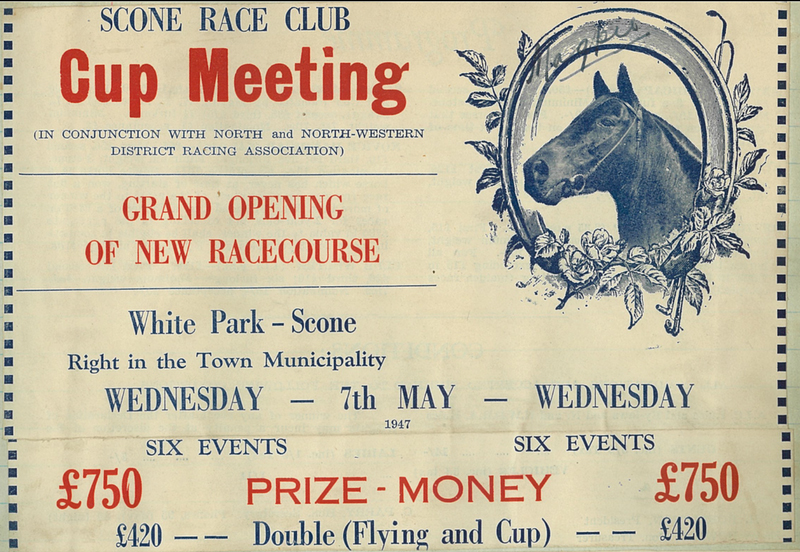 White Park itself is steeped in history.

Originally it was part of Kelly’s Farm, the property of sailor Richard Kelly who lost two of his ships while employed under government contract in the early 1820’s and received a grant of 1920 acres in Scone as compensation. Richard Kelly did not have the land for long, before selling it to another local landowner, William Dumaresq in 1833, who was the first owner of the local property "St Aubin’s". Kelly’s farm became part of St Aubins soon afterwards and when Bakewell’s subdivided the old Racecourse Paddock the people of Scone were given the use of the paddock.

In the 20th Century, White Park was the largest park in Scone. It was never officially gazette as a park but a piece of ground adjoining the town and owned by William Bakewell of St Aubins and came to be known as Bakewell’s Paddock or the Town Paddock. It was very popular with Scone people as a recreation and sports area. For many years school picnics, Empire Day functions and many sporting activities were held there, but when further subdivisions of St Aubins were made in the early 1920s it seemed that the town would once again lose a popular recreation area.

Picnics were a common presence in the park like St Patrick’s Day when Catholic families would gather in the park for celebrations.

After William Bakewell’s death in 1917, the people of Scone were fearful that they might lose the use of White Park, however A.J Dodd who was the Mayor of Scone from 1920-1923 was very anxious to acquire the land.

The owners agreed to accept twenty five pounds per acre.

The Municipal Council were having some difficulty about arranging the financing of the purchase, Mr Alf G White of Belltrees, seeing the difficulty the Council were in, gladly financed the matter. This was not a loan but as a gift. Mr A.G White said

"I have lived in this district all these years and feel that I would like to do something for the town and townspeople."

The opening ceremony of White Park brought a large audience with procession of school children. The gates were erected by local tradesman Mr C Dunbar for the brick and cement work of the pillars and W.T Cooper for the ironwork inscription "Presented to the people of Scone by A.G. White, Esq, Belltrees, WHITE PARK" and officially opened for this purpose 9 June 1924. The gates were also decorated for the event. Mr A.G White cut the ribbon for the opening and donated a further 500 pounds, 250 for the work or planting trees and 250 for their attention after planting.

In 1945 Council then took over the ownership of White Park.

The annual horse sales initiated in 1945 were also transferred to White Park. The Council Minutes of 28 November 1953 state that the auctioneers Pitt, Son and Keene in conjunction with Inglis and Son were granted permission to hold on the race course section of White Park.

At the first council meeting of 1945 on 8 January, it was announced that Scone Jockey Club had applied for permission to establish a race course on White Park.

Racing in Scone has been at different venues such as Belmore Heights, Alabama, St Aubins and even at Aberdeen on a couple of occasions before the club settled into White Park with the first race meet to be held on May 7, 1947. The club raced there for 48 years before gaining a new home at Satur.

In 1974 a grant expansion in the provision of horse boxes in White Park began and the construction of 110 horse boxes was accepted. A double lot of horse boxes were built by 1975 and by 1980 further improvements to them were also made.

Also in 1980 further improvements were made at White Park with a new grandstand and amenities block.